big-up respect to this little lady who i spotted at 9.25am along rue de poitou in the 3rd arrondissement this morning. just check her colour and print combination – fifty bucks says dries van noten would be jumping for joy at her savvy-knack for teaming together the whole ensemble. right here is a classic example of what i’m really going to miss about paris when i leave in two weeks time. witnessing that all-important, turbo-inspiring “french madame after-market shopping look.” 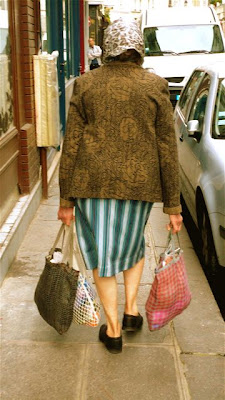 meet catherine baba and marcus mam.
originally from australia, catherine is a stylist who frequently refers to herself as “she” and describes 99% of things as “gorgeous” or “major and official.” she belongs in a woody allen film. in the 6 years i have known her i’ve never ever seen her fingernails not painted. nor have i ever seen her in flat shoes. she smokes yves saint laurent cigarettes and has a definite savoire-faire for accessories (think second generation lou lou de la falaise). marcus is a turbo-talented photographer who hails from close to ohio, but has been paris-based for several years. as my mother would say, “they broke the mould when they made him.” there’s something very unique about his spirit, a very kind and super-funny guy. looking at this photo of them together makes me think of the time i first arrived in paris during the late 90’s when i would admire them from afar at parties. both of them played a major role in the rise of jeremy scott’s career in paris back in the day and they were always really animated characters to watch. as you can kind of notice from their pose, nothing has changed. 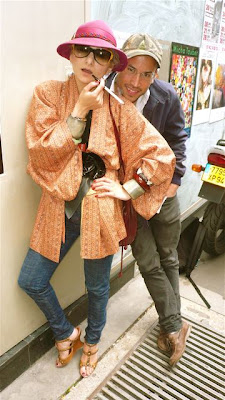 beating the heat this past week-end in venice was by no means an easy feat. yet sarah (pictured here trekking between pavillions at the biennale) evidently didn’t have a problem looking cool. indeed, peggy guggenheim would have been proud – and dare i say, jealous of her luella bartley/linda farrow white ray bans? a sagittarian in every sense of the word, sarah rocks her own unique style 24/7 and that’s what makes her the humble icon of colette. proving the point: the girl has complete carte blanche in choosing any accessory for her wardrobe and so what does she opt for during a week-end getwaway? the PAM/colette canvas bag designed especially for honeyee.com! now that’s what i call chic. somebody give the girl another bellini! 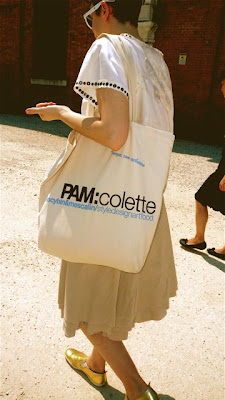 introducing judith, lily and jessica aka a.p.c angels.
legend has it that behind every great man is an even greater woman. in which case, behind a successful businessman such as a.p.c’s jean touitou, you have three: judith, her daughter lily, and jessica ogden. now judith i don’t know so well, but she’s clearly one of those women who you can see has some spunky intellect about her minus the pretention. she’d have to in order to produce a little angel such as lily here (who is the talk of the town this week following an appearance at her daddy’s new a.p.c store opening on rue madame on the left bank). to the right is jessica ogden, the now paris-based designer whose madras collection for the brand is the stuff that magic is made of. together, as one, this photo speaks to me in terms of a great expression which goes: “what you see is where you’re at.”
now that’s what i call happiness. 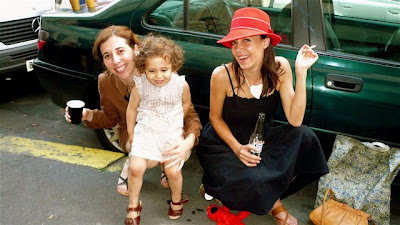 introducing judith, lily and jessica aka a.p.c angels. legend has it that behind every great man is an even greater woman. in which case, behind a successful businessman such as a.p.c’s jean toitou, you have three, them being judith, her daughter lily, and jessica ogden. now judith i don’t know so well, but she’s one of those women who you can see has some spunky intellect without the pretention about her. she’d have to in order to produce a little angel such as lily here who is the talk of the town this week in paris following the new a.p.c store opening. to their right is the charming jessica ogden, the now paris-based designer whose madras collection for the brand is seriously the stuff that magic is made of. nobody rocks a turquoise stussy t-shirt quite as well as our piscean trend-setter, carlos. part-time photographer/part-time heart throb, if he’s not telling tourists what they should be listening to at colette (where he reps as the music department maestro), then you’re bound to find this kid with an ultra-charismatic chipped front tooth riding around paris on his bike or deejaying at some underground club. carlos is french, but one of his parents is actually of portugese origin (that probably explains why he is able to sport a moustache and ray bans better than most). 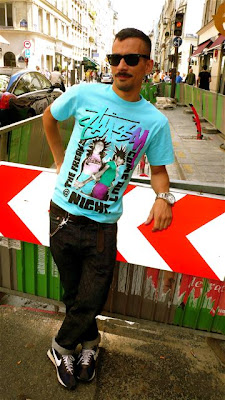 up until this afternoon (just moments prior to spotting this in place du marché st honoré) i always believed i had a pretty good grasp on life and all that comes with it. then i saw this image below and, well, frankly, je comprends rien maitenant. 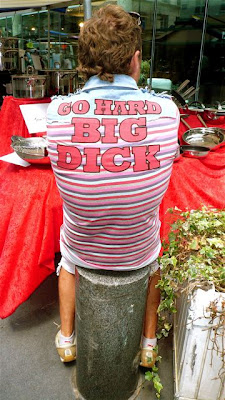 you know that cliché french girl who sits at a cafe smoking gitanes, drinking coffee, flicking her hair, pouting her lips, refusing advances from elderly gentlemen and in general exuding that all-out lolita-esque vibe? well this is her, with her dog. 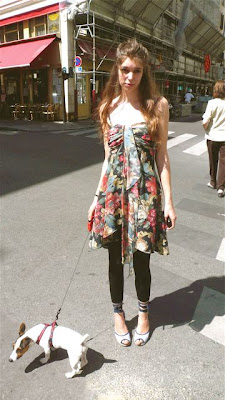