as men’s fashion week approaches in paris – a time of the year when editors miraculously appear relaxed between shows and emaciated looking stick figures walk the streets in dior jeans – everyone on rue st honoré anxiously awaits the superstrutt of marko matysik.
if he wasn’t an accessory designer legend. if he wasn’t a spirited beauty reporter for japanese vogue, or if he wasn’t such an intriguing conversationalist (be sure to ask him to spill the beans on his meeting with mouna ayoub, the one where he literally sold the shirt off his back), then oh what a world it would be if marko started teaching wannabe models how to prance!
just moments after taking this photo late last year, an elderly english gentleman (who was observing marko as he sauntered along the street on his way to an appointment at colette) remarked how he found the women in paris so remarkably confident. go figure! 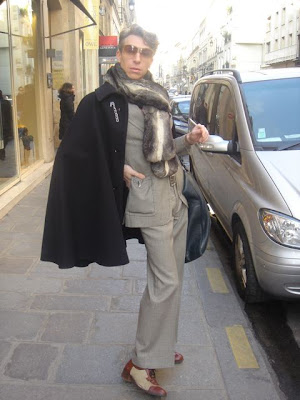